The match between Cadiz vs Real Madrid for the Spain Primera Liga competition is scheduled to be played on 15 May, 2022. The match kicks off at 18:30 UK time. It will take place at the Estadio Nuevo Mirandilla, in Cádiz.

Cadiz have managed just three home wins this season. Cadiz sit narrowly above the La Liga relegation zone and they could hardly wish for a tougher game as they look to secure their place in Spain’s top flight than facing the champions. Cadiz has won 4 games, they have 2 games that the final result was a draw, and they have lost 4 games in the last 10 games. 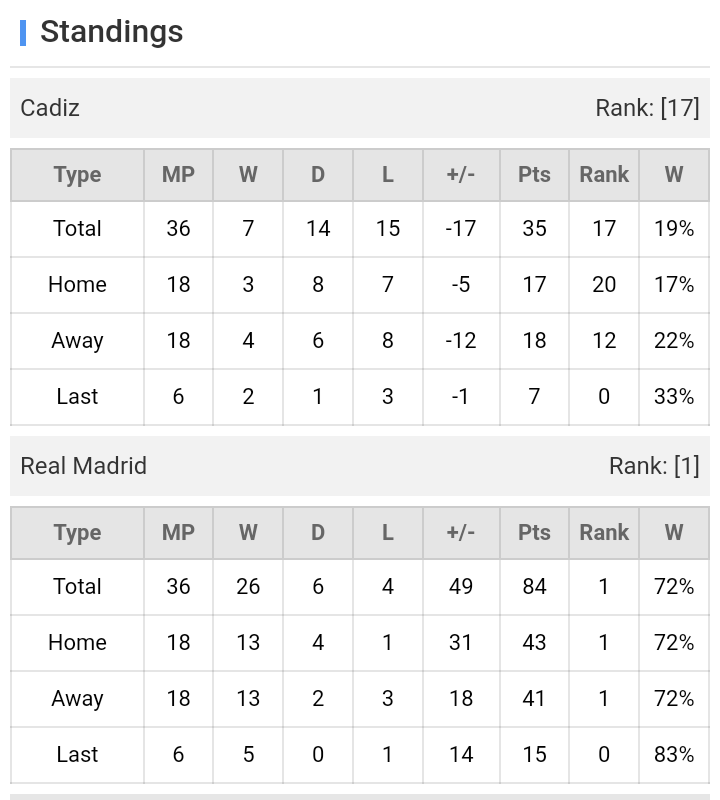 Real Madrid have been victorious in five of their last six away league games, They have already been crowned Spanish champions, Carlo Ancelotti’s side also have the best away record in the division, racking up 13 wins from 18 attempts with those matches averaging nearly four strikes per 90 minutes. Real Madrid has won 7 games, they have 0 games that the final result was a draw, and they have lost 3 games in the last 10 games.

From their past h2h Madrid has won 4 and lost 1. I predict that Real Madrid will win this game comfortably

Football Spanish La Liga Real Madrid Cadiz
(Disclaimer：Any views or opinions presented are solely those of the author and do not necessarily represent those of NowGoal. We disclaim any responsibility and accepts no liability for any direct or indirect loss or damage arising from any inaccuracies.)