Lyon and Nantes will play for France Ligue1 Round 37 at Groupama Stadium on Saturday.

Lyon
Although they push hard in recent games for the qualification for European games, they fail to close the gap, ranking eighth at the table of the League. In the last game, Moussa Dembele played a hat trick but they still suffer a 3-2 defeat to Metz. 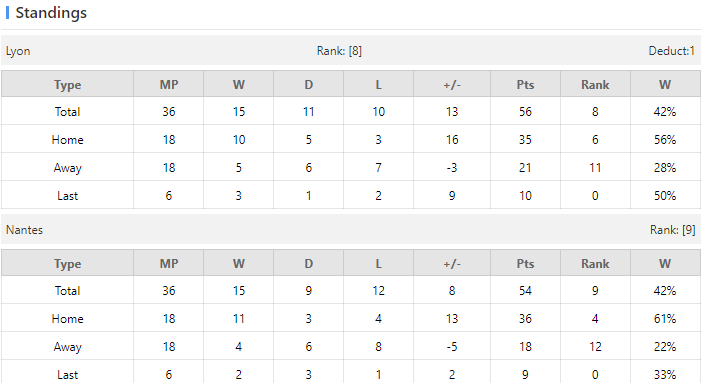 Nantes
They rank ninth at the table of the League, just behind Lyon. They are in high morale after they won the championship of the French Cup, getting a 2-1 victory from Rennes in the last game. They show competitiveness in recent games. The last defeat they have got was from Marseille in April.

Verdict:
Lyon got 6W-2D-2L from Nantes in the past, which take the upper hand. What’s more, Lyon have home advantage. But Nantes are in form now. So the upcoming game is going to end in a tight tie.

Football France Ligue 1 Nantes Lyon
(Disclaimer：Any views or opinions presented are solely those of the author and do not necessarily represent those of NowGoal. We disclaim any responsibility and accepts no liability for any direct or indirect loss or damage arising from any inaccuracies.)