Schalke will take a trip to Gand Stadium for the last round of German Bundesliga2 against Nurnberg.

Nurnberg
As they have been winless for four rounds, there is no hope for them to upgrade, which causes them low morale. They play poorly on defence in recent games, even conceding 4 goals at Gand Stadium against Sandhausen. In the last game, they lose to Holstein Kiel 3-0. 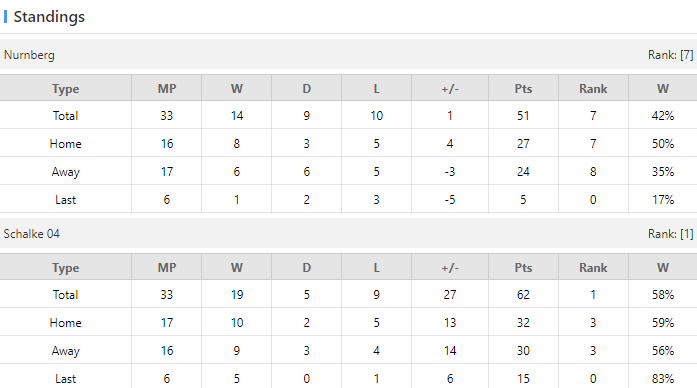 Schalke 04
On the contrary, they defeat St. Pauli 3-2 in the last game. It is the seventh victory they have got since April. They rank at the top of the League table now. They will return to Bundesliga as long as they get a tie in the upcoming game. They are ambitious and mentally relaxed.

Verdict:
Nurnberg got 1D-4L from Schalke in the past, which makes them under pressure. Besides, Schalke are in good condition while Nurnberg are in a poor state. It is predicted that Schalke will take three points from Nurnberg in the coming fixture.

Football German Bundesliga 2 Schalke 04 Nurnberg
(Disclaimer：Any views or opinions presented are solely those of the author and do not necessarily represent those of NowGoal. We disclaim any responsibility and accepts no liability for any direct or indirect loss or damage arising from any inaccuracies.)