The Serie A match at Unipol Domus on Sunday sees home team Cagliari fighting it out with Inter Milan.

Cagliari
Cagliari head into this game following on from a 1-1 Serie A drawn match versus Salernitana. It has not been often in recent games where Cagliari have shown defensive steel. The reality is that Cagliari have seen their defence breached in 5 of their previous 6 matches, letting in 11 goals on the way. With no two games being the same, it remains to be seen if such a trend shall persist in this upcoming game. 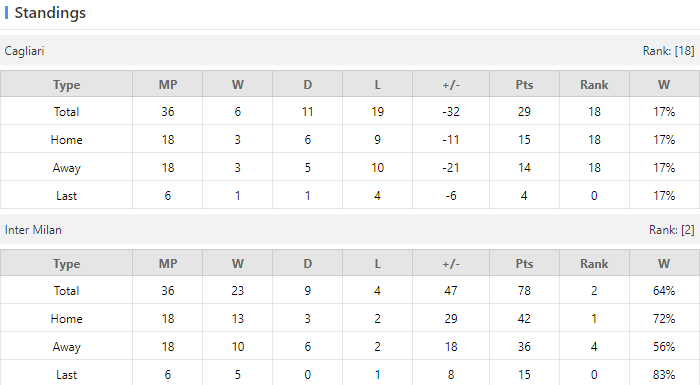 Football Italian Serie A Inter Milan Cagliari
(Disclaimer：Any views or opinions presented are solely those of the author and do not necessarily represent those of NowGoal. We disclaim any responsibility and accepts no liability for any direct or indirect loss or damage arising from any inaccuracies.)