The Serie A game at Stadio Giuseppe Meazza on Sunday will see home side AC Milan play against Atalanta.

AC Milan
AC Milan, who won their previous game, will hope for a similar result following the 1-3 Serie A triumph versus Hellas Verona. Stefano Pioli's AC Milan have netted 8 times in their last 6 outings. The corresponding tally of goals that have been scored against them in that same time is 5. 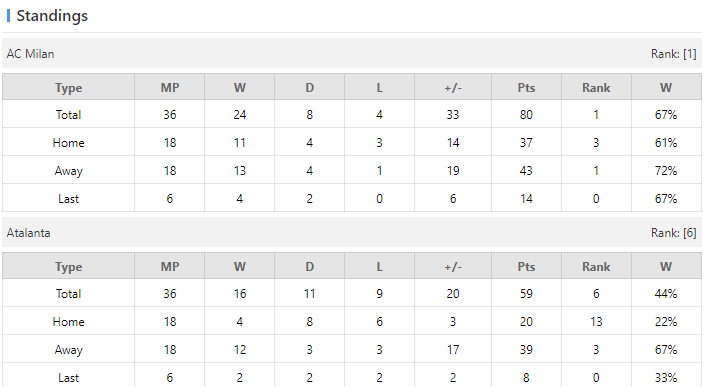 Atalanta
Atalanta go into this game following a 1-3 Serie A win to defeat Spezia in their previous outing. Illustrating their fondness for high-scoring matches, goals have been seen as many as 23 times in the prior six games in which Atalanta have sent out their troops, yielding a mean average of 3.83 goals each meeting. Opposing teams have hit 11 of this grand total.

Verdict:
Milan have won their last two meetings against Atalanta. The 1X2 first odd is 1.75-4.00-4.20, which means support the home team. Milan should win this game.

Football Italian Serie A Atalanta AC Milan
(Disclaimer：Any views or opinions presented are solely those of the author and do not necessarily represent those of NowGoal. We disclaim any responsibility and accepts no liability for any direct or indirect loss or damage arising from any inaccuracies.)