On Sunday, Watford will play Leicester City at Vicarage Road Stadium in a Premier League encounter.

Watford
Following a 0-0 draw against Everton, Watford will participate in this match. Watford's offensive numbers haven't been very remarkable recently. In their past six games, they have only scored three goals against other teams and has also had a total of 13 goals scored against them in those encounters. The team has not won at home in the last 12 league matches. 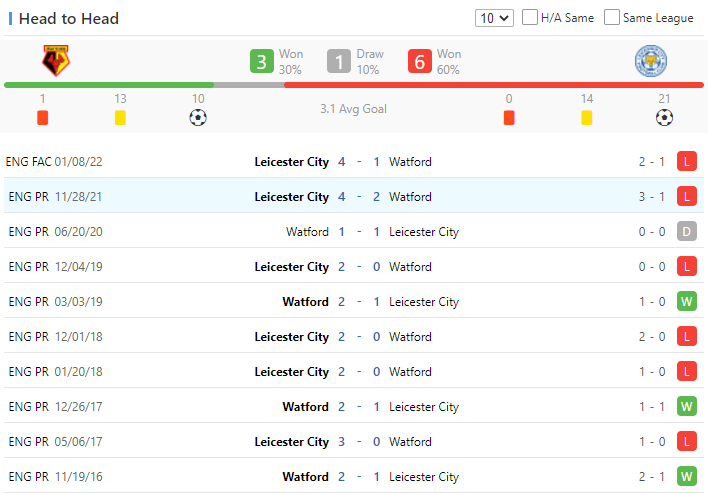 Leicester City
Leicester City will enter this match after a 3-0 win against Norwich City last time out. Leicester City's goal-scoring efforts have been rewarded six times in their last six games under Brendan Rodgers. During the same time frame, they have had seven goals scored against them. The team has lost their last five league games on the road.

Prediction
Watford will have to put up a strong performance to score against Leicester City. Most significantly, Leicester City have a favorable head-to-head record versus this opponent. As a result, expect Leicester to win convincingly on Saturday.

Football English Premier League Leicester City Watford
(Disclaimer：Any views or opinions presented are solely those of the author and do not necessarily represent those of NowGoal. We disclaim any responsibility and accepts no liability for any direct or indirect loss or damage arising from any inaccuracies.)