Bologna will face off against visiting side Sassuolo at Stadio Renato Dall'Ara in the Serie A match on Sunday.

Bologna
Bologna won’t want a repeat of their last result here after a 4-3 Serie A losing effort in their last game against Venezia. Siniša Mihajlović's Bologna have celebrated scoring 10 times over their last 6 outings. The tally of goals that have been scored against them in that time stands at 8. 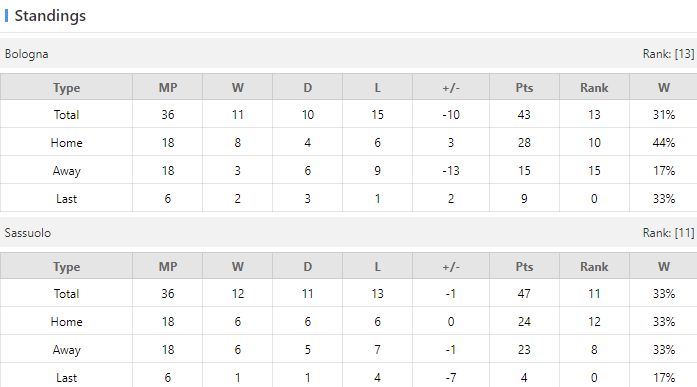 Sassuolo
Previously, Sassuolo drew 1-1 in the Serie A match with Udinese. Sassuolo have been effective going forward leading up to this encounter, having scored 6 times in their last 6 matches. While their manager Alessio Dionisi will no doubt take that as a positive sign, Sassuolo have had their own issues at the back, also conceding in 6 of those same clashes. That kind of pattern isn’t assured to be carried forward into this game, though.

Verdict:
The two sides are not far apart in power. The 1X2 first odd is 2.60-3.60-2.50, seems lacked of confidence to the home team. Sassuolo should take points in this game.

Football Italian Serie A Sassuolo Bologna
(Disclaimer：Any views or opinions presented are solely those of the author and do not necessarily represent those of NowGoal. We disclaim any responsibility and accepts no liability for any direct or indirect loss or damage arising from any inaccuracies.)