At Unipol Domus, Cagliari goes head to head against Inter Milan on Sunday at 19:45.

Cagliari will most likely need to avoid defeat against the reigning champions here to stay away from dropping down more. The team has a lot to prove as the coach is impressed with them after seeing a draw in their last game. With five matches played has secured just one win, three-loss and a draw, and a total of four goals. 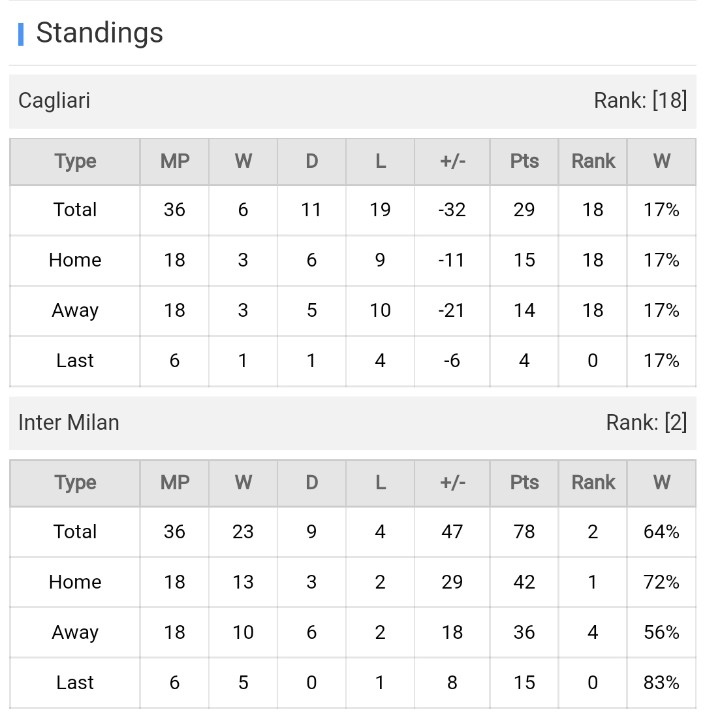 Milan is still racing for the title as they are two points away from the top spot and more focus is to win this to secure a place in the champion league next season. The has been able to complete a list of away records in the competition and is perfectly determined. Milan with five games played (W4, L1) and scored a total of 14 goals in their last five matches.

No clear doubt that Milan has won four matches and a draw against Cagliari in their last five meetings but Cagliari might hold the line as they fight to stay off the relegation zone.

Football Italian Serie A Inter Milan Cagliari
(Disclaimer：Any views or opinions presented are solely those of the author and do not necessarily represent those of NowGoal. We disclaim any responsibility and accepts no liability for any direct or indirect loss or damage arising from any inaccuracies.)