Sporting Lisbon and Santa Clara draw the curtain on their 2021-2022 Primeira Liga campaign when they go head to head at the Estadio Jose Alvalade on Saturday.

Sporting Lisbon have now won each of their last three outings, scoring 10 goals and conceding three since a 1-0 defeat at the hands of rivals Porto in the second leg of their cup semi-final clash on April 21. With 82 points from 33 games, Ruben Amorim's side have confirmed their place in next season's Champions League as they sit second in the Primeira Liga standings, 11 points above third-placed Benfica in the playoff spot. 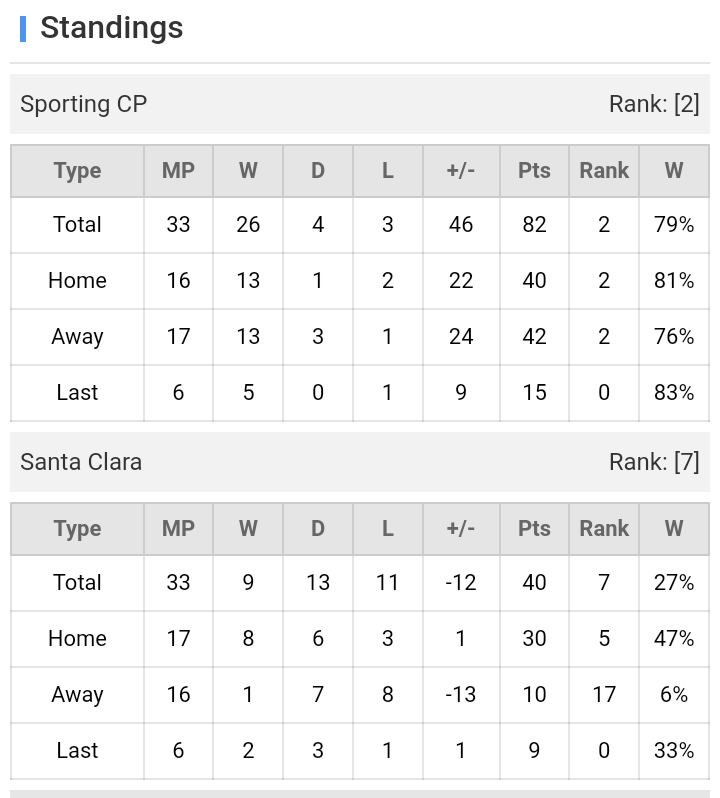 Santa Clara head into the weekend unbeaten in five consecutive outings, picking up two wins and three draws, while they have lost just twice in the league since the turn of the year. Off the back of a sixth-placed finish last season, Mario Silva's men currently sit seventh in the standings with 40 points from 33 games, six points off their 2020-2021 tally with one game left to play.

Sporting Lisbon head into the game in superb form and will be seeking to close out their season on a high. From their h2h sporting has won 7, lost 1 . Sporting Lisbon will most probably see a lot of the ball and convert quite a few goal-scoring opportunities.

Football Portugal Primeira Liga Santa Clara Sporting CP
(Disclaimer：Any views or opinions presented are solely those of the author and do not necessarily represent those of NowGoal. We disclaim any responsibility and accepts no liability for any direct or indirect loss or damage arising from any inaccuracies.)