Cádiz will take on Real Madrid at the Estadio Nuevo Mirandilla on Sunday in a La Liga match.

Cadiz
Cádiz will be looking for a better outcome after losing 3-0 to Real Sociedad in their last encounter. They have scored eight goals in their past six games. On the other hand, they have had 9 goals scored against them in the same games. Cádiz has been winless in both of their league encounters against Real Madrid. 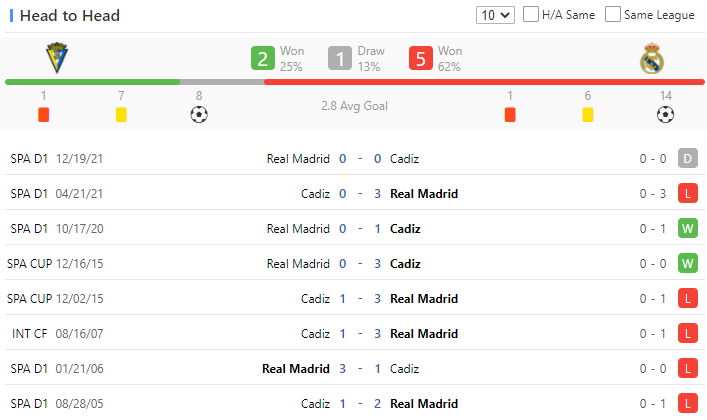 Real Madrid
Real Madrid enters this match after defeating Levante 6-0 in their previous match in La Liga. A minimum of three goals have been scored in at least five of Real Madrid's past six games. During that time, the average number of goals scored per match was 4.33, with Real Madrid scoring an average of 3.17.

Prediction
This is a game where Cádiz may struggle to reach the back of the goal against a Real Madrid team that we believe will win and maybe keep a clean sheet. As a result, we predict Real Madrid to clinch a hard-fought victory.

Football Spanish La Liga Real Madrid Cadiz
(Disclaimer：Any views or opinions presented are solely those of the author and do not necessarily represent those of NowGoal. We disclaim any responsibility and accepts no liability for any direct or indirect loss or damage arising from any inaccuracies.)