On Saturday, Borussia Monchengladbach will face Hoffenheim in a Bundesliga 1 match at Borussia-Park.

Borussia Monchengladbach
Gladbach are coming off a 1-1 tie against Eintracht Frankfurt last time out. Borussia Mönchengladbach has been surrendering goals on a regular basis recently, despite scoring goals itself. The team has had their goal broken in five of their last six games, while also scoring in six of those games. 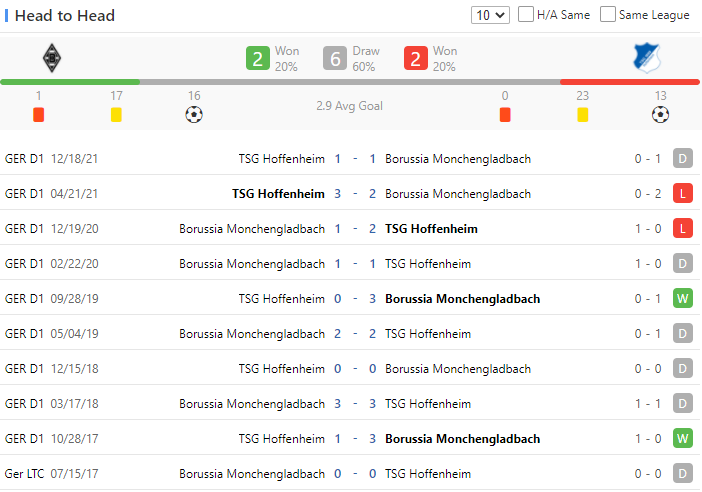 TSG Hoffenheim
Hoffenheim will be looking to bounce back after losing their previous game against Bayer Leverkusen. At least three goals have been scored in at least five of Hoffenheim's past six games. During that span, the average number of goals scored per game was 3.83, with Hoffenheim scoring an average of 1.33. In their past three league games, they have failed to win away from home.

Prediction
Borussia Mönchengladbach, in our opinion, has the ability to produce a sufficient amount of chances and shoots on target. Hoffenheim, on the other hand, will be up against it to score, though we believe they will do so.

Football German Bundesliga TSG Hoffenheim Borussia Monchengladbach
(Disclaimer：Any views or opinions presented are solely those of the author and do not necessarily represent those of NowGoal. We disclaim any responsibility and accepts no liability for any direct or indirect loss or damage arising from any inaccuracies.)