On Saturday, Cologne will face Stuttgart at Mercedes-Benz Arena in the Bundesliga 1 matchup.

VfB Stuttgart
Stuttgart are coming off a 2-2 tie against Bayern Munich last time out. Stuttgart has been conceding much too frequently in recent years. Their failure to keep opponents from scoring in five of their last six games, allowing eight goals, will be a source of concern for them. In their past two league encounters, the team has failed to win at home. 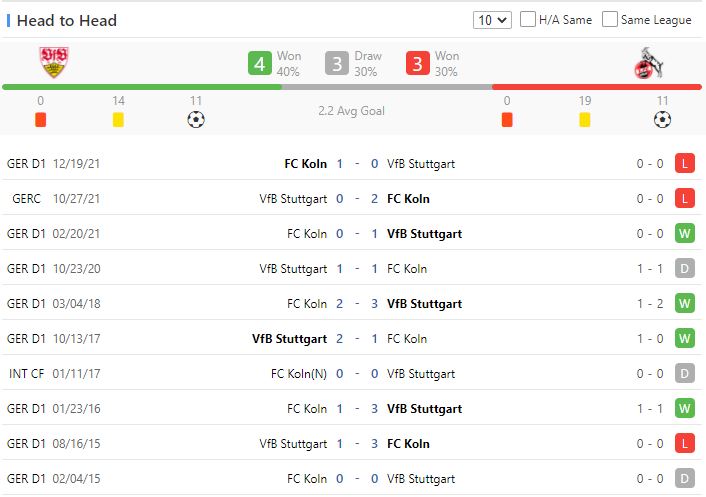 FC Koln
Cologne and their travelling fans will be hoping for a better outcome here after losing their last game to Wolfsburg. Cologne has been outscored in six of their previous six games, with their opponents scoring a total of seven goals. Cologne can surely improve its defensive performance. The team are unbeaten in their past two league away games.

Prediction
Stuttgart, in my opinion, should dominate possession and produce numerous successful opportunities. Cologne, on the other hand, will have a difficult time finding the back of the net - although we do see them converting at least once here. As a result, we believe that Stuttgart will have a controllable winning margin.

Football German Bundesliga FC Koln VfB Stuttgart
(Disclaimer：Any views or opinions presented are solely those of the author and do not necessarily represent those of NowGoal. We disclaim any responsibility and accepts no liability for any direct or indirect loss or damage arising from any inaccuracies.)