VfL Wolfsburg meet away side Bayern Munich at Volkswagen Arena in the Bundesliga 1 fixture on Saturday.

VfL Wolfsburg
VfL Wolfsburg will be hoping for a repeat of their last result, following the 0-1 Bundesliga 1 success versus Cologne. Fixtures featuring VfL Wolfsburg have usually been exciting ones recently with plenty of scoring being a common characteristic. Over their past six clashes, a total of 22 goals have been scored for both sides combined (at an average of 3.67 goals per game) with 12 of those belonging to VfL Wolfsburg. 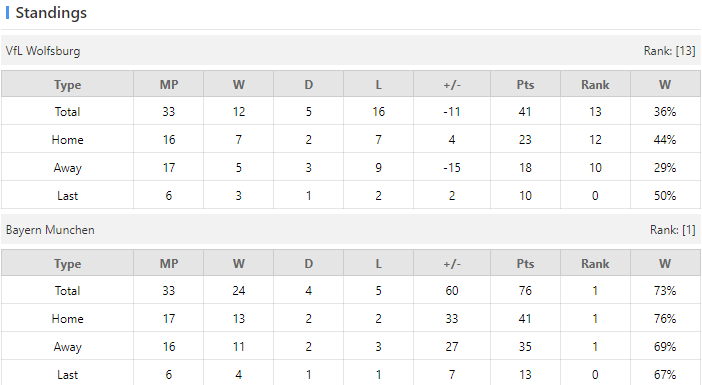 Bayern Munchen
In their previous fixture, Bayern Munich drew 2-2 in the Bundesliga 1 match with Stuttgart. In their last 6 clashes, Bayern Munich have amassed a tally of 11 goals. Bayern Munich have also managed to score in every single one of those games. During those fixtures, their defenders have seen 7 goals scored by their opponents. Let’s see if that trend will be sustained into this next match.

Verdict:
There is a big difference between the two teams, but neither team has much fighting spirit. The 1X2 first odd is 5.25-4.75-1.53, which mean support the away team. Bayern Munchen should win this game.

Football German Bundesliga Bayern Munchen VfL Wolfsburg
(Disclaimer：Any views or opinions presented are solely those of the author and do not necessarily represent those of NowGoal. We disclaim any responsibility and accepts no liability for any direct or indirect loss or damage arising from any inaccuracies.)