Mainz come up against away team Eintracht Frankfurt at MEWA Arena in the Bundesliga 1 meeting on Saturday.

FSV Mainz 05
Mainz are in better form than before, having won two games in a row at hertha Berlin 2-1 in the last league round. And they beat Bayern Munich 3-1 in their last home game and the confidence is very good. They have a 62 percent home win rate this season, fourth in the league. 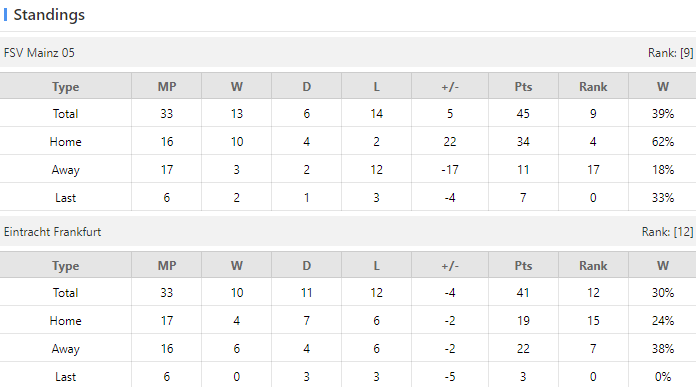 Eintracht Frankfurt
Frankfurt drew 1-1 at home to borussia Monchengladbach in the last round of the competition, which has gone seven consecutive league games without a win and is in poor form. And they need to focus on the Europa League final, which should be played with substitutes.

Verdict:
Mainz is definitely in better shape and morale. The 1X2 first odd is 1.67-4.20-4.50, which mean support the home team. Mainz should win this game.

Football German Bundesliga Eintracht Frankfurt FSV Mainz 05
(Disclaimer：Any views or opinions presented are solely those of the author and do not necessarily represent those of NowGoal. We disclaim any responsibility and accepts no liability for any direct or indirect loss or damage arising from any inaccuracies.)