Cádiz will be at Reale Arena on Thursday for the La Liga meeting with home side Real Sociedad.

Real Sociedad
Real Sociedad will be looking for an improved result here after the 2-1 La Liga loss in their previous game against Levante. Imanol Alguacil's Real Sociedad have found the net 5 times in their past six outings. The comparative tally of goals that have been scored against them in that time amounts to 5. 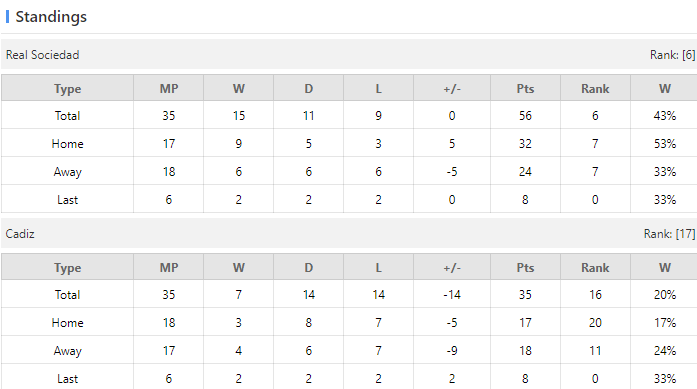 Cadiz
Cádiz will go into this meeting following a 3-0 La Liga win with the downing of Elche CF in their previous game. In the course of their 6 previous matches, Sergio González's Cádiz have fired home a total of 8 times thus giving them the goals scored per game average of 1.33.

Verdict:
The power gap between the two sides is wide. The 1X2 first odd is 1.57-4.00-5.75, which mean support the home team. Real Sociedad should win this game.

Football Spanish La Liga Cadiz Real Sociedad
(Disclaimer：Any views or opinions presented are solely those of the author and do not necessarily represent those of NowGoal. We disclaim any responsibility and accepts no liability for any direct or indirect loss or damage arising from any inaccuracies.)