Manchester City will visit Molineux Stadium on Wednesday for the Premier League showdown with hosts Wolves.

Wolves secured an unlikely point at Stamford Bridge on Saturday as two late goals cancelled out a quickfire Romelu Lukaku brace but, with games against Manchester City and Liverpool still to come, it is unlikely to be enough to bridge the gap between themselves and seventh-place West Ham. Wolverhampton has won 3 games, they have 1 game that the final result was a draw, and they have lost 6 games in the last 10 games. 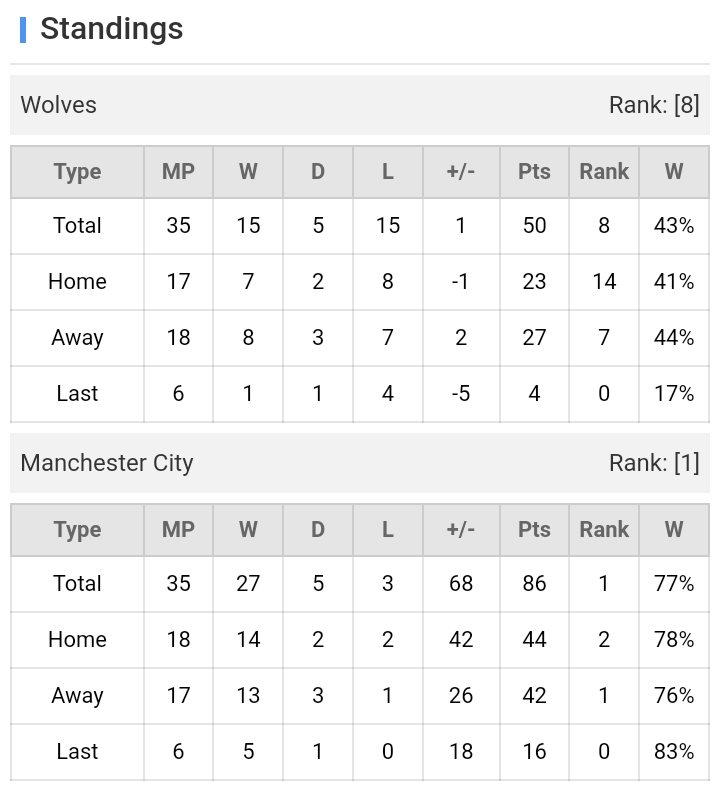 Pep Guardiola’s team opened up a three-point gap at the top of the table in emphatic fashion on Sunday, thrashing Newcastle 5-0 as they start the healing process from yet another Champions League elimination. City may have lost in Madrid, but in the Premier League they are unbeaten in nine games and have won seven of those, scoring 26 goals in the process and conceding just four times.

With the visitors scoring at last three goals in each of their last four league games, I’m also opting for a repeat of Wolves’ last home fixture in the form of a 3-0 correct score prediction.

Football English Premier League Manchester City Wolves
(Disclaimer：Any views or opinions presented are solely those of the author and do not necessarily represent those of NowGoal. We disclaim any responsibility and accepts no liability for any direct or indirect loss or damage arising from any inaccuracies.)