The Eredivisie meeting at De Adelaarshorst on Wednesday will see home side Go Ahead Eagles lock horns with opponents Feyenoord.

Go Ahead Eagles
Go Ahead Eagles will be hoping for a better result following the 1-0 Eredivisie loss in their previous game against NEC. A common feature of recent Go Ahead Eagles games is the number of nil scores. From their prior six clashes leading up to this one, in 5 of them a wager on both teams scoring would have lost. 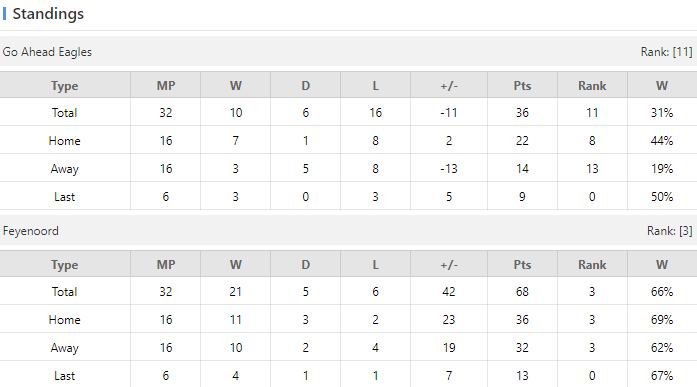 Feyenoord
In their last fixture, Feyenoord drew 2-2 in the Eredivisie match with PSV Eindhoven. The stats tell the story, and Feyenoord have been scored against in 5 of their last 6 games, letting opponents get 6 goals in total. At the back, Feyenoord can certainly do much better. That sort of pattern won’t necessarily be carried forward into this match, however.

Verdict:
The strength gap between the two sides is huge. The 1X2 first odd is 6.50-4.75-1.44, which means support the away team. Feyenoord should win this game.

Football Holland Eredivisie Feyenoord Go Ahead Eagles
(Disclaimer：Any views or opinions presented are solely those of the author and do not necessarily represent those of NowGoal. We disclaim any responsibility and accepts no liability for any direct or indirect loss or damage arising from any inaccuracies.)