Vejle BK will take a trip to Viborg Stadion after a 3-1 Denmark Cup defeat to Midtjylland.

Viborg
Seeing from the statistics in the last game, Viborg FF had 40% possession and 7 shots on goal with 3 on target. The only player to score for Viborg FF was Clint Leemans. It has been all too rare in recent times that Viborg FF have shown defensive steel. Viborg FF have failed to prevent opponents from scoring in 5 of their previous 6 matches, leaking 7 goals along the way.

Vejle
Since a loss in their previous game against FC Midtjylland in DBU Pokalen action, Vejle BK and their travelling fans will hope for a better result here. The attacking players from Vejle BK have been starved of goals in their past 6 clashes, contributing to the disappointing return of just 3. In those fixtures, De Røde have also seen the overall goal tally against them equal 9. 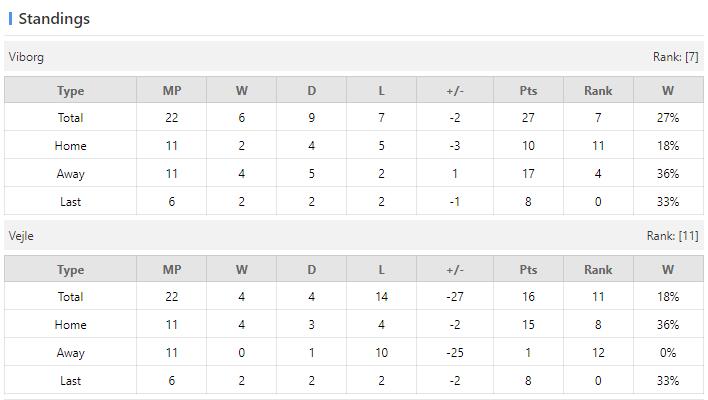 Verdict:
The average goal of their past head to head clashes is up to 3.6. We conclude from above that Viborg show a stronger offence trend in matches. Viborg will possibly win in the upcoming fixture with home advantage.

Football Denmark Superligaen Vejle Viborg
(Disclaimer：Any views or opinions presented are solely those of the author and do not necessarily represent those of NowGoal. We disclaim any responsibility and accepts no liability for any direct or indirect loss or damage arising from any inaccuracies.)