IFK Norrköping are the guests at Olympia on Monday for the Allsvenskan tie with home team Helsingborgs IF.

Helsingborg
Helsingborg returned to Swedish Allsvenskan this season, but have only won one game so far, their strength is still relatively weak, they only scored six goals in seven games, very poor attacking ability. But the last two home games they picked up four points, confidence is good. 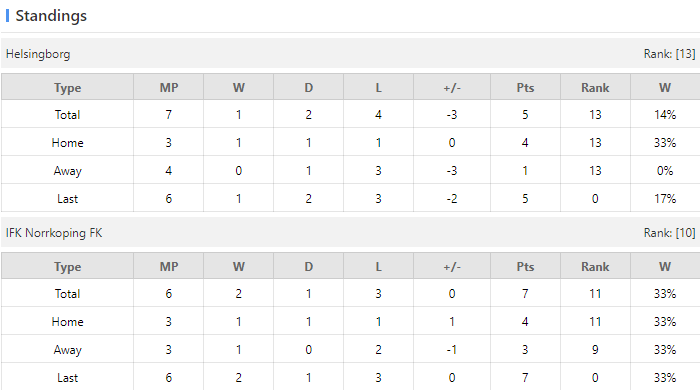 IFK Norrkoping FK
IFK Norrköping head into the meeting following a 2-0 Allsvenskan win in the defeat of IFK Värnamo in their last outing. Looking at their form, and IFK Norrköping have been scored against in 5 of their last 6 matches, seeing opposing sides hit 6 goals in total. At the back, IFK Norrköping seem to have a bit of a soft underbelly.

Verdict:
Neither side is in good form and the difference in strength is narrow. The 1X2 first odd is 3.50-3.50-2.00, which mean support the away team. Norrkoping should win this game.

Football Swedish Allsvenskan IFK Norrkoping FK Helsingborg
(Disclaimer：Any views or opinions presented are solely those of the author and do not necessarily represent those of NowGoal. We disclaim any responsibility and accepts no liability for any direct or indirect loss or damage arising from any inaccuracies.)