San Jose Earthquakes
San Jose suffered a 3-0 losslast weekend against New York City. Before this game, they have been untable for 3 rounds, and defeated Bay Cities 5-0 in the US Open Cup, and they followed that up with a thrilling 4-3 victory against Seattle Sounders. However, that is the only match that they have won in this MLS, which is why they are currently second bottom in the Western Conference. 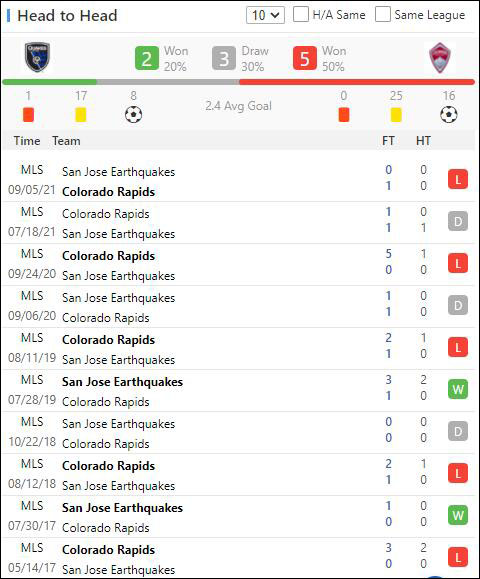 Colorado Rapids
Colorado Rapids shows defenses in good quality for they keep clean sheets in recent games. This has allowed them to ahchieve a two-game undefeated run featuring a goalless draw, and then a 2-0 victory against Portland Timbers last weekend.

Prediction:
San Jose Earthquakes have been struggling in this season, and their poor defense is the key problem. Here predict Colorado Rapids would take all 3 points.

Football USA Major League Soccer Colorado Rapids San Jose Earthquakes
(Disclaimer：Any views or opinions presented are solely those of the author and do not necessarily represent those of NowGoal. We disclaim any responsibility and accepts no liability for any direct or indirect loss or damage arising from any inaccuracies.)