FC Dallas will welcome Seattle Sounders to the Toyota Stadium.

FC Dallas
FC Dallas enters into this match with 8 unbeaten rounds, and now they rank 3rd on Western Conference. In last round, they only ended with a 2:2 draw against Kansas City. The game saw them finish with 10 men after a red card to Brandon Servania, but Jesus Ferreira and Alan Velasco were on hand to find the back of the net to ensure they took a point. The team have been undefeated at home as well. 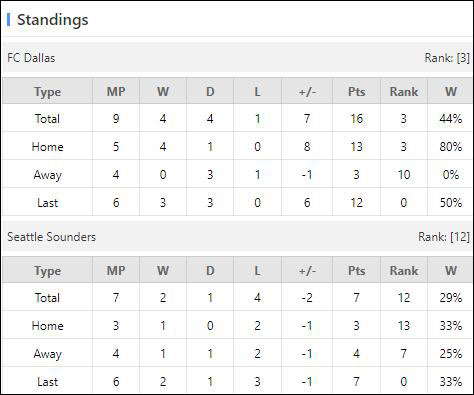 Seattle Sounders
Seattle Sounders have been struggling in this MLS, but they were able to lift the CONCACAF Champions League in midweek after defeating Club Universidad Nacional. However, in the MLS, they have only managed to win two rounds so far, which is why they currently ranked 12th in the Western Conference. Seattle Sounders have played at least two games less than every team.

Prediction:
FC Dallas have been in impressive forms in the league, and they should be able to extend their undefeated run at home on Sunday.

Football USA Major League Soccer Seattle Sounders FC Dallas
(Disclaimer：Any views or opinions presented are solely those of the author and do not necessarily represent those of NowGoal. We disclaim any responsibility and accepts no liability for any direct or indirect loss or damage arising from any inaccuracies.)