On May 8th clash, Philadelphia Union will travel to the Banc of California Stadium in downtown Los Angeles.

Los Angeles FC
Los Angeles FC have the best record in the MLS and lead the Western Conference with a record of 7-1-1 and 22 points. Their opponents, the Philadelphia Union, have hit a bit of a skid after starting the season by taking 16 of a possible 18 points in the first six matches. Last season's MLS Cup semi finalists have now gone three matches without a win and are coming off back-to-back 1-1 draws, the most recent away to Nashville. The Union have a record of 5-3-1 and sit atop the Eastern Conference with 18 points. They will be faced with the challenge of a cross country trip and facing a formidable LAFC side that has won four out of five at home with 12 goals scored and only three conceded. 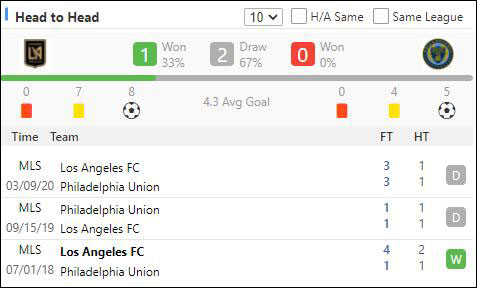 Philadelphia Union
One of the keys to Philadelphia’s successful campaign last year was their solid defense. They’ve carried over that mentality into this season as they currently sport the league’s best defensive record with only six goals conceded and four clean sheets through their nine matches. They’ll need to be at their best here when they come up against one of the league’s most potent offenses. LAFC are dealing with some injuries, most notably Uruguayan Brian Rodriguez and Colombian Eddie Segura, but they still have a healthy core of Carlos Vela, Cristian Arango and Kellyn Acosta. Philadelphia will be hoping that new striker Mikael Uhre will start banging in the goals with regularity now after scoring his first MLS goal in the 1-1 draw against Nashville the last time out. Uhre, the club's record transfer, was brought in from Danish side Brondby IF as a direct replacement for the Union’s second all-time highest goal scorer Kacper Przybylko. Uhre’s production will be key this season if Philadelphia are to make the leap and challenge for the MLS Cup.

Verdict:
Los Angeles FC have 4 wins in a row, with scoring 12 goals totally. Therefore I predict Los Angeles FC would get 3 points.

Football USA Major League Soccer Philadelphia Union Los Angeles FC
(Disclaimer：Any views or opinions presented are solely those of the author and do not necessarily represent those of NowGoal. We disclaim any responsibility and accepts no liability for any direct or indirect loss or damage arising from any inaccuracies.)