The 2nd leg of the UEFA Europa League between Frankfurt and West Ham is coming this week! Will West Ham revenge in the coming match?

Eintracht Frankfurt
In the last game, they lose to Bayer Leverkusen 2-0, which have been winless for six League games. It is because they focus more on the Europa League. They surprisingly knocked out FC Barcelona and come into the Semi-Final. It is believed that they will spare no effort on the road to the Final.

West Ham United
They also offer a big surprise this season. They defeated Sevilla and Lyon and get into the Semi-Final. As they rank the seventh in EPL, the only chance for them to play UEFA Champions League is to win the title of the Europa League. Undoubtedly they will try their best in the coming game. 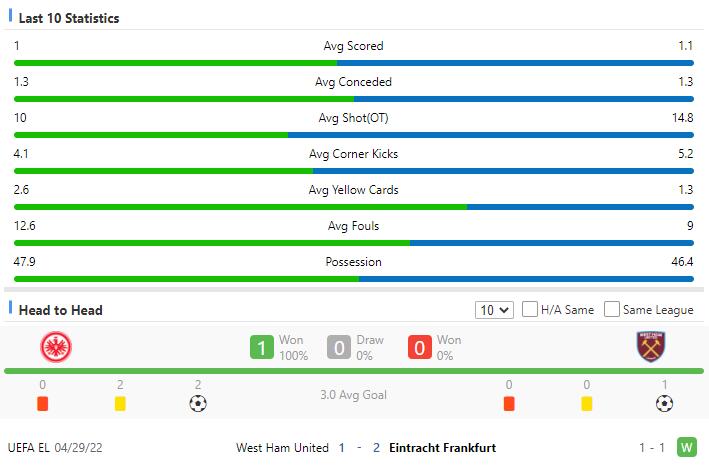 Verdict:
In the 1st leg, Frankfurt got a 1-2 away win from West Ham, which makes them have a psychological advantage. But Frankfurt play a high-intensive game three days ago. West Ham have more time to rest. The result of the upcoming game is suggested to be a draw in 90 minutes.

Football UEFA Europa League West Ham United Eintracht Frankfurt
(Disclaimer：Any views or opinions presented are solely those of the author and do not necessarily represent those of NowGoal. We disclaim any responsibility and accepts no liability for any direct or indirect loss or damage arising from any inaccuracies.)