FC Cincinnati and Toronto square battle for the second time in less than a week, with both clubs looking to reclaim a postseason spot in Major League Soccer's Eastern Conference.

FC Cincinnati
On Saturday, Cincinnati was able to finish the job and collect three points, snapping a four-game losing streak at home. Fighting through adversity has not been easy for this team so far in 2022, with the team scoring first in every match last month but only four points out of a potential 12 in MLS. 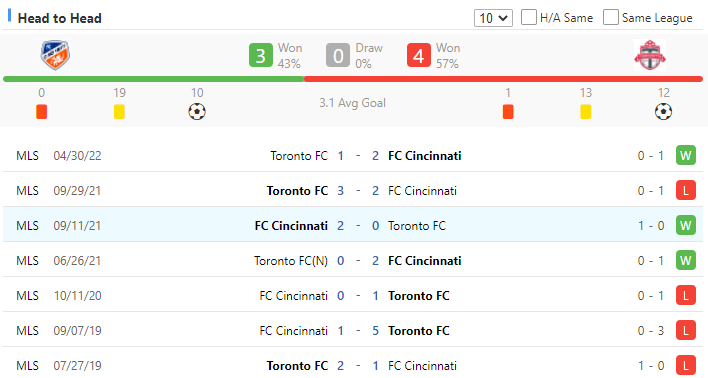 Toronto FC
Toronto's momentum has been interrupted in recent games after some strong performances that saw them go on a four-match undefeated streak. For the second time in 2022, the Reds have lost consecutive games. TFC has failed to win away from home this season, with their last road triumph coming against the Chicago Fire in July of last year.

Prediction
Cincinnati seems to struggle at home for some reason, and they aren't quite as quick on the ball throughout 90 minutes. Despite Toronto's struggles on the road, we anticipate Bradley and his youthful squad to make the necessary tactical adjustments in this one, as they have done so well in the past.

Football USA Major League Soccer Toronto FC FC Cincinnati
(Disclaimer：Any views or opinions presented are solely those of the author and do not necessarily represent those of NowGoal. We disclaim any responsibility and accepts no liability for any direct or indirect loss or damage arising from any inaccuracies.)