WestHam United will battle Eintracht Frankfurt in the first leg of the Europa League on Thursday night.

West Ham United
The host who haven't gotten to this stage over a decade will be focused in getting to the finals of this year Europa league. The hammers defeat Lyon to get through to this stage, with the first leg of that encounter ending a 1-1 draw. Before Westham travelled to France with a 3-0 victory over Lyon. Although the host sits 7th in the Premier League, trying to fight for a possible Europa league spot comes next season. That wouldn't be a way out as they seek for their first ever European Trophy. 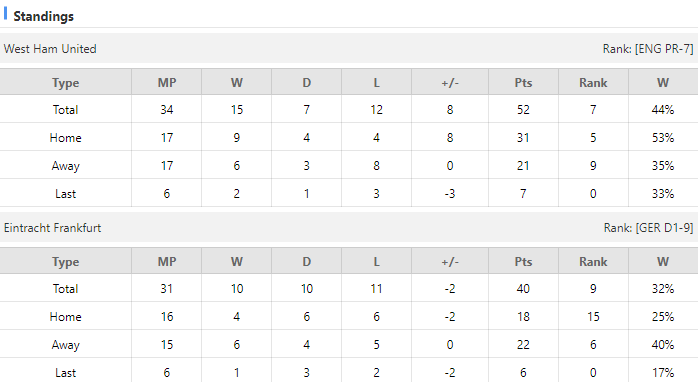 Eintracht Frankfurt
Eintracht Frankfurt will travel to the London stadium to see if they progress to the finals of this year competition in Europe. The visitors ended a six game winless streak by defeating Barcelona 3-2 in the quarter finals, after the first leg ended 1-1.  Then lost to Union Berlin in the German division before, the 2-2 draw with Hoffenheim in last weekend outing. Eintracht Frankfurt haven't gotten to this stage in decades will be hopeful for a positive result.

VERDICT:
Both teams haven't met in this competition ever, as this would be the first time they meet.the last 5 games of West ham have seen under 2.5 goals why Frankfurt have seen both teams score in their last 5 matches except one.

Football UEFA Europa League Eintracht Frankfurt West Ham United
(Disclaimer：Any views or opinions presented are solely those of the author and do not necessarily represent those of NowGoal. We disclaim any responsibility and accepts no liability for any direct or indirect loss or damage arising from any inaccuracies.)