Rayo Vallecano
Rayo Vallecano are hoping to win again after their last result, a 1-2 Copa del Rey victory versus Girona FC. In their prior six games, Andoni Iraolas Rayo Vallecano have hit the target 9 times, with that being an average number of goals scored per match equal to 1.5. Heading into this contest, Rayo Vallecano havent been defeated in their previous 10 home league matches. They have been so resilient here. 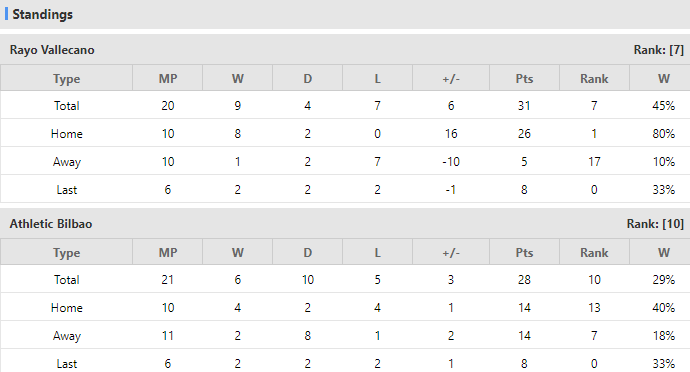 Athletic Bilbao
Athletic Bilbao will go into the encounter following on from a 3-2 Copa del Rey win over Barcelona in their previous game. García Torals Athletic Bilbao have fired home a total of 10 times in the course of their most recent six matches. The aggregate of goals that have been scored against them during those same clashes adds up to 6.

Verdict:
Vallecano is the top of the league at home, they should confident in this game. The 1X2 first odds is 2.80-3.00-2.70, which means  support the home team, Vallecano should  take points in ths game.

Football Spanish La Liga Athletic Bilbao Rayo Vallecano
(Disclaimer：Any views or opinions presented are solely those of the author and do not necessarily represent those of NowGoal. We disclaim any responsibility and accepts no liability for any direct or indirect loss or damage arising from any inaccuracies.)