Borussia Monchengladbach will host Union Berlin at Borussia-Park on Saturday.


Borussia Monchengladbach
Borussia Monchengladbach are in unsteady forms. In last match in German Cup, they even chose to give up strategically. They were eliminated in the 0-3 away defeat to Hannover 96, and they lost 6 out of the past 8 games. At present, the team is only 4 points away from the relegation zone in the standings, and the situation is in jeopardy. 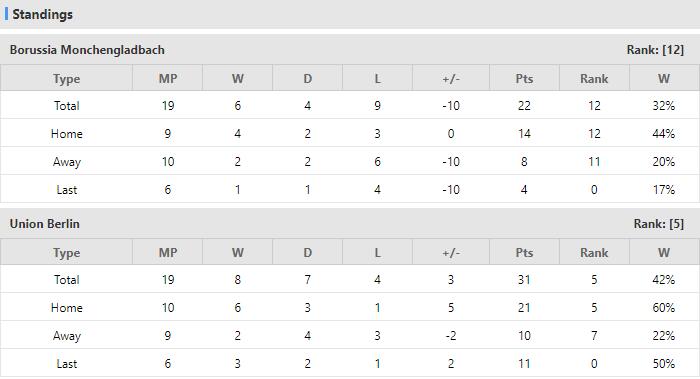 Union Berlin
In the last match, Union Berlin defeated Hertha Berlin with 3-2 in the German Cup and successfully advanced. In the past 5 games, they have remained unbeaten and are in good forms. Their opponents were even included Freiburg and Bayer Leverkusen.

Football German Bundesliga Union Berlin Borussia Monchengladbach
(Disclaimer：Any views or opinions presented are solely those of the author and do not necessarily represent those of NowGoal. We disclaim any responsibility and accepts no liability for any direct or indirect loss or damage arising from any inaccuracies.)