Manchester United
Manchester United are struggling under interim manager - Ralf Ragnick, as they are placed at 7th position in the league table. They have got 10 wins, 5 draws and 6 losses so far. On Wednesday, Manchester United enjoyed their 1-3 Premier League triumph over Brentford. Before that, the Red Devils stepped onto the pitch against Aston Villa and got the draw with a final of 2-2. Manchester United have scored 10 and conceded 6 goals during the past 6 league games. 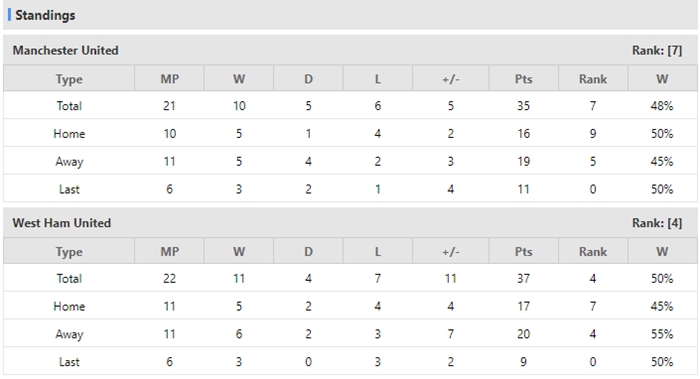 West Ham United
Ranking 4th on the standing, West Ham United have recorded 11 wins, 4 draws and 7defeats to collect 37 points. West Hams four-game winning streak came to an end at home to Leeds last time out in a 3-2 defeat. Prior of that game, they hosted Norwich City and beat them 2-0. Goals have been scored as many as 15 times in the prior 6 matches in which West Ham United have taken to the pitch.


Prediction
Manchester United are currently in shaky form, but the victory on Wednesday proved they still are a fierce team. West Ham have had an overall season consistent but had a shocker against Leeds United in their last game. Manchester United are the likelier side to win.

Football English Premier League West Ham United Manchester United
(Disclaimer：Any views or opinions presented are solely those of the author and do not necessarily represent those of NowGoal. We disclaim any responsibility and accepts no liability for any direct or indirect loss or damage arising from any inaccuracies.)