Aston Villa arrive at Goodison Park on Saturday for the Premier League game with home side Everton.

Everton
With 5 victories, 4 draws and 7 defeats, are currently in the 16th position, being just 6 points clear of the relegation zone. Everton will be looking to improve on their last outing here after the 2-1 Premier League defeat in their last game at the hands of Norwich City. Preceding of that game, they shared a 2-2 draw with Hull City in England FA Cup. Over their last 6 matches, Everton have conceded in 6 of them in addition to scoring in 6 of those matches. 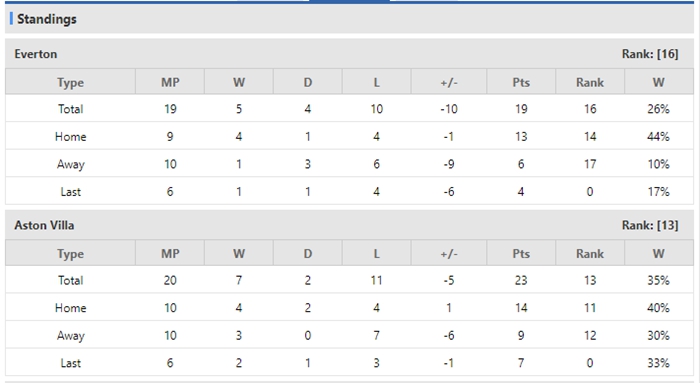 
Prediction
Everton are in one of their worst phases, while Aston Villa had a rejuvenated approach under the guidance of Steven Gerrard. Aston Villa are slightly favorites in this game, therefore, expect them to be unbeaten at least.

Football English Premier League Aston Villa Everton
(Disclaimer：Any views or opinions presented are solely those of the author and do not necessarily represent those of NowGoal. We disclaim any responsibility and accepts no liability for any direct or indirect loss or damage arising from any inaccuracies.)