The Phoenix Suns and Dallas Mavericks meet Thursday in NBA action at the American Airlines Center.


Dallas Mavericks
The Dallas Mavericks have won 10 of their previous 11 games and are sitting in fifth place in the Western Conference standings. Last night, Dallas were able to make the plays down the stretch of a 102-98 home victory versus Toronto. Luka Doncic led the team with a season-high 41 points, 14 rebounds and seven assists, Kristaps Porzingis added 18 points with seven rebounds while Tim Hardaway Jr. chipped in with 16 points off the bench. The Dallas Mavericks are averaging 105.5 points on 45 percent shooting and allowing 102.7 points on 45.4 percent shooting. 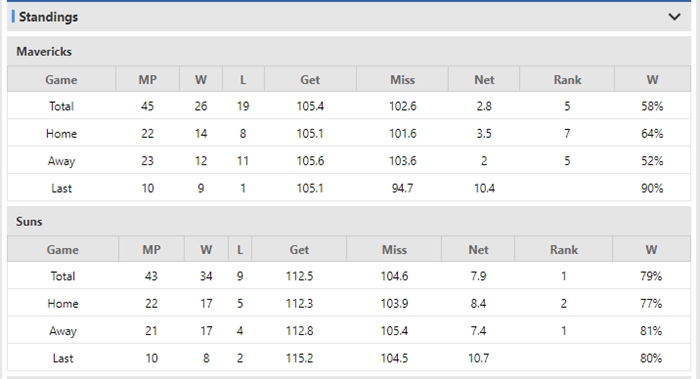 Phoenix Suns
The Phoenix Suns (34-9) are riding a four-game winning streak and own the best overall record in the league. On Monday, Phoenix outscored San Antonio by 18 points during the fourth quarter to rally for a 121-107 road victory. Devin Booker led the team with 48 points and six assists on 18 of 33 shooting, Bismack Biyombo added 17 points with 14 rebounds off the bench while Chris Paul chipped in with 15 points and 12 assists. The Phoenix Suns are averaging 112.5 points on 47.6 percent shooting and allowing 104.6 points on 43.6 percent shooting.


Prediction
The Phoenix Suns are mostly at full strength except for Abdel Nader and DeAndre Ayton who are listed as out, while the Dallas Mavericks have ruled out Sterling Brown who is dealing with an ankle injury. The Suns rank fourth in the league in offensive efficiency and are the better defensive team. Predict them to win this game.

Basketball National Basketball Association Suns Mavericks
(Disclaimer：Any views or opinions presented are solely those of the author and do not necessarily represent those of NowGoal. We disclaim any responsibility and accepts no liability for any direct or indirect loss or damage arising from any inaccuracies.)