New York Knicks
The New York Knicks have had a below-par season this time around and are placed eleventh in the East with a 22-23 record. On Tuesday, New York were outscored by seven points during the fourth quarter of a 112-110 home loss versus Minnesota. Evan Fournier led the team with 27 points on 10 of 17 shooting, Julius Randle added 21 points with nine rebounds and nine assists while Kemba Walker chipped in with 19 points. The New York Knicks are averaging 104.3 points on 43.8 percent shooting and allowing 104.6 points on 43.9 percent shooting. 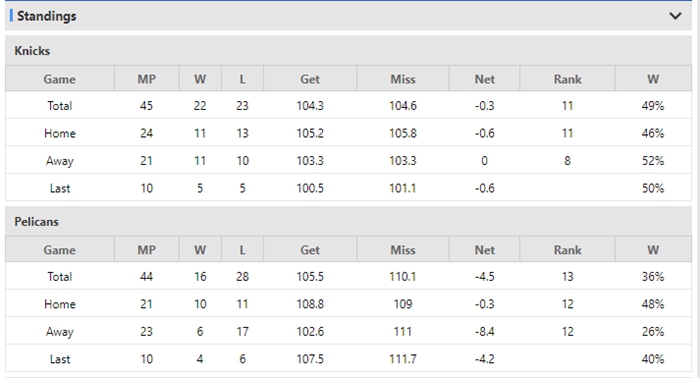 
Prediction
The New York Knicks have not lived up to the expectations laid upon them at the start of the season. However, if compared to the Pelicans, the Knicks have done a lot better than them. New York Knicks will be the favorites coming into this game

Basketball National Basketball Association Pelicans Knicks
(Disclaimer：Any views or opinions presented are solely those of the author and do not necessarily represent those of NowGoal. We disclaim any responsibility and accepts no liability for any direct or indirect loss or damage arising from any inaccuracies.)