This is the second season of Beerschot Wilrijk 's return to the Belgian Pro League. In this round of fixture, they will be faced with Club Brugge at home.

Beerschot Wilrijk
Beerschot Wilrijk have not been able to continue the good performance of last season. In this season, they have only won 4 league games in total. With only one round left in the league of this season, Beerschot Wilrijk has even completely lost hope of avoiding relegation, and the team's desire to win will become quite limited. In recent games, even though they are in fierce offenses, but they also conceded lots of goals. 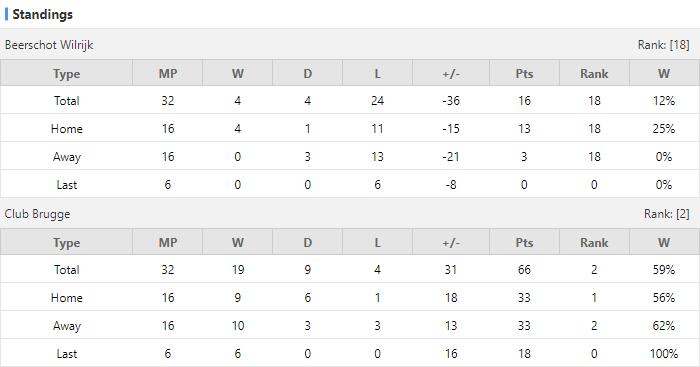 Club Brugge
Club Brugge became more and more stable at the end of the season. They were able to easily win 3-1 against their strong rivals, Racing Genk, in last round. They have got 6 consecutive league victories recently, ranking No. 2 on the table. With fierce offenses, they scored at least 3 goals in each of their last 5 games, but they conceded goals in 4 of these games. Moreover, many of their players played for their country during the international matches.


Prediction:
There is a huge gap in strength between these two teams, but after all, the rankings in the league have become a foregone conclusion. Both sides’ defensive sides are riddled with mistakes, so here predict lots of goals in this round.

Football Belgian Pro League Club Brugge Beerschot Wilrijk
(Disclaimer：Any views or opinions presented are solely those of the author and do not necessarily represent those of NowGoal. We disclaim any responsibility and accepts no liability for any direct or indirect loss or damage arising from any inaccuracies.)