Tottenham Hotspur will arrive at King Power Stadium on Wednesday for the Premier League game with home side Leicester City.


Leicester City
Having garnered 25 points from 18 matches, Leicester City sit 10th in the Premier League ladder. They shocked Liverpool 1-0 in the previous league tie back on December 28th last year, ten days before bagging four goals past Watford in the third round of FA Cup. No team outside of the bottom six conceding more than the 33 goals that they have shipped in league play. 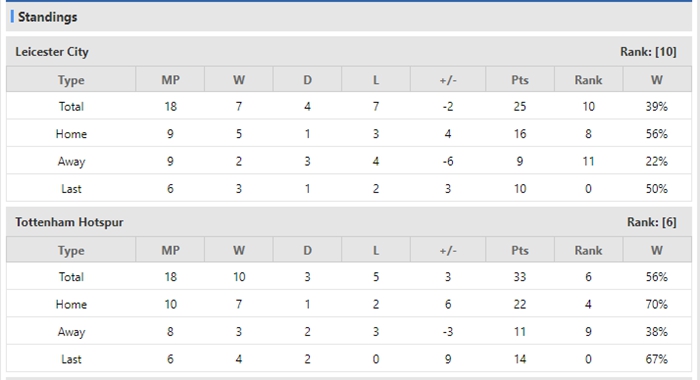 Tottenham Hotspur
Tottenham Hotspur are four places better off in sixth place on 33 points, four points behind the top four with several games in hand. Returning to winning ways in their most recent league game, the Spur defeated Watford 1-0 on New Years Day. Since that victory, Antonio Contes men suffered a 3-0 defeat to Chelsea in the EFL Cup semi-final over two legs, either side of a 3-1 FA Cup win at home to third-tier strugglers Morecambe.


Prediction
Leicester City have been among the biggest underperformers in the league this season. And they are also missing a number of key players who are currently at the 2021 Africa Cup of Nations. Tottenham Hotspur arguably have more of their stars available, and they should have enough to get over the line.

Football English Premier League Tottenham Hotspur Leicester City
(Disclaimer：Any views or opinions presented are solely those of the author and do not necessarily represent those of NowGoal. We disclaim any responsibility and accepts no liability for any direct or indirect loss or damage arising from any inaccuracies.)