Sevilla will enter La Liga at Valencia on Wednesday with a chance to move within two points of leaders Real Madrid. 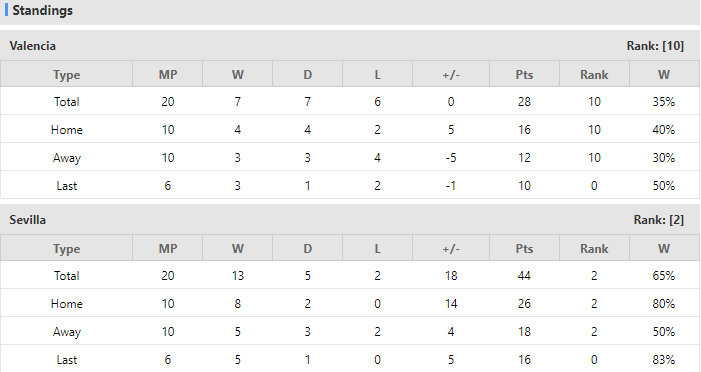 Sevilla
Amid the controversy and disappointment of a Copa Del Rey loss to Real Betis, Julen Lopetegui s side are trying to get back on track. Before that game. Sevilla were unbeaten in seven consecutive games. They beat Getafe 1-0 last round - just five points behind Real Madrid in the La Liga table. Sevilla have a good away defense performance for having conceded just five goals in ten away games this season.

Prediction
Based on their current form, Sevilla are undoubtedly the favourites for this competition, but Valencia will feel they can improve in front of their supporters. All things considered, a hard-fought victory for the visiting team is the most likely outcome.

Football Spanish La Liga Sevilla Valencia
(Disclaimer：Any views or opinions presented are solely those of the author and do not necessarily represent those of NowGoal. We disclaim any responsibility and accepts no liability for any direct or indirect loss or damage arising from any inaccuracies.)