Chelsea are the guests at AMEX Stadium on Tuesday for the Premier League fixture with home side Brighton. 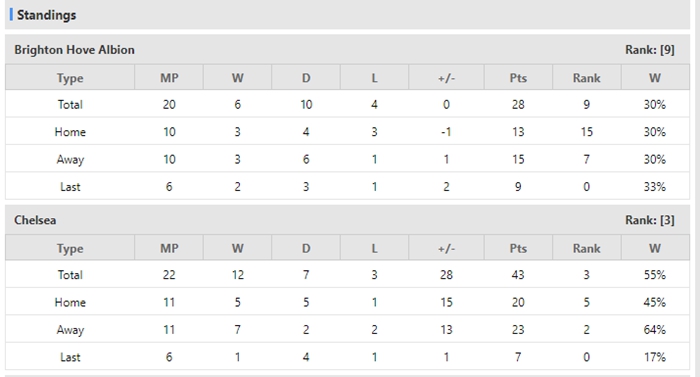 Chelsea
Chelsea sit in third place on 43 points, 13 points behind Manchester City. They have actually only won one of their last six league matches, drawing four times in the process. However, Chelsea have the second-best away record in the division this term, collecting 23 points from 7 wins and 2 draws. Chelsea all but put paid to their title aspirations after they fell to a 1-0 defeat away to Manchester City.


Prediction
Brighton Hove Albion have never won a Premier League match against Chelsea. Nevertheless, Brightons home record leaves a lot to be desired. Predict Chelsea to secure a narrow victory with goals at both ends.

Football English Premier League Chelsea Brighton Hove Albion
(Disclaimer：Any views or opinions presented are solely those of the author and do not necessarily represent those of NowGoal. We disclaim any responsibility and accepts no liability for any direct or indirect loss or damage arising from any inaccuracies.)