The Premier League fixture at Turf Moor on Tuesday will see home side Burnley welcome Watford.


Burnley
Recording one win, eight draws and eight defeats from their 17 matches, Burnley have dropped to the bottom of the table, one point behind 19th-placed Newcastle. Burnley have not been in Premier League action since losing 3-1 at Leeds United on January 2, but they also suffered a 2-1 home defeat to Huddersfield Town last weekend, with their last victory of any kind coming against Brentford in the Premier League at the end of October. 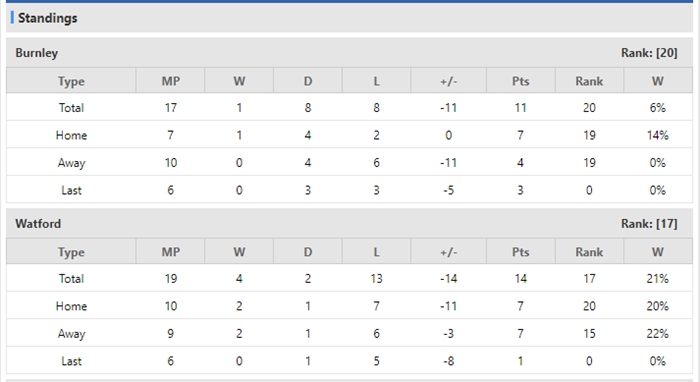 Watford
Watford are looking to pounce on their miserable run and put some more daylight between them and the relegation zone. Watford havent covered themselves in glory either, sitting just three points clear of Burnley in 17th place, hovering just a point clear of the bottom-three. Watford havent won since their stunning 4-1 rout of Manchester United in November, losing six on the trot before a 1-1 draw with Newcastle in their last outing.


Prediction
Its a game between two sides in horrible form as neither team have been particularly impressive and the both seem to be set for a relegation scramble ahead. Therefore, expect the two rivals will play out a low-scoring draw.

Football English Premier League Watford Burnley
(Disclaimer：Any views or opinions presented are solely those of the author and do not necessarily represent those of NowGoal. We disclaim any responsibility and accepts no liability for any direct or indirect loss or damage arising from any inaccuracies.)