Cadiz will do battle with visiting opponents Espanyol at Estadio Nuevo Mirandilla in the La Liga match on Tuesday.

Cadiz
Picking up just 14 points from their opening 20 matches of the season, are currently 19th in the standing of La Liga. They are winless in their last seven league outings and have won just twice in the league all season. Cadiz enter this game coming off the back of a 0-0 Copa del Rey drawn game against Sporting Gijon but they won on penalties at last. Before that, they suffered a 2-0 loss to Osasuna. 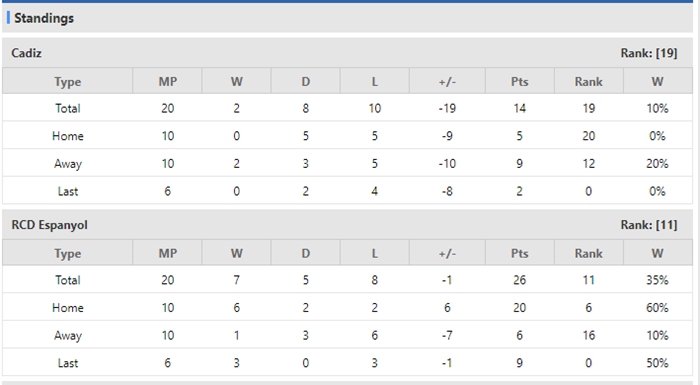 RCD Espanyol
Espanyol occupy 11th in Spains top flight, boasting 26 points from their first 20 games of 2021-22. They have found it difficult to pick up positive results on their travels this season, winning just one of their 10 away La Liga matches. Espanyol suffered a 2-1 defeat to Elche in their last league match on January 10 before losing by the same scoreline to Mallorca in the Copa del Rey on Saturday.


Prediction
Cadiz are winless at home in the league this term and have failed to score in their last three games. The game is expected to be a low-scoring affair. Except that Espanyol should be unbeaten and even have a chance to secure all three points.

Football Spanish La Liga RCD Espanyol Cadiz
(Disclaimer：Any views or opinions presented are solely those of the author and do not necessarily represent those of NowGoal. We disclaim any responsibility and accepts no liability for any direct or indirect loss or damage arising from any inaccuracies.)