On Friday night, when the Utah Jazz visit the San Antonio Spurs, the enemies of the Western Conference will face off.

San Antonio Spurs
The Spurs have lost 20 of their 32 home games, two games behind New Orleans and rank 10th in the West. On Wednesday, Gregg Popovich's efforts to become the most winning coach in history were undermined in his 119-104 home loss to Toronto. Keldon Johnson scored 27 points for 10 of 19 shots and grabbed eight rebounds, leading all scorers. 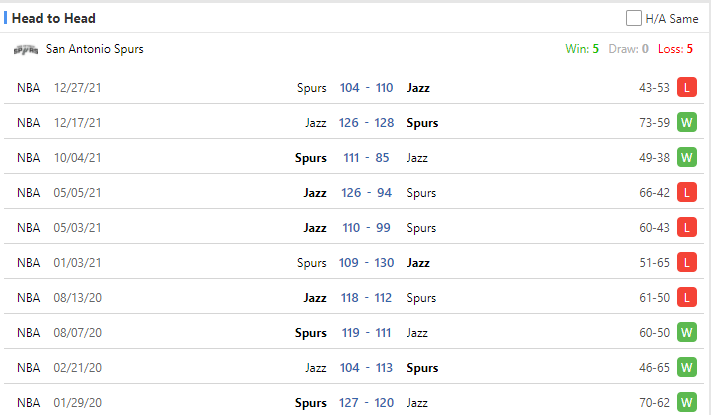 Utah Jazz
The Jazz (41-24) have won 7 of the past 10 games, 2.5 games behind the Golden State Warriors, ranking third in the West. Utah led by 18 points after a quarter and beat Portland 123-85 at home on Wednesday. Bojan Bogdanovic contributed a game-high 27 points for 9 of 14. Dejounte Murray added 16 points and six assists to the Jazz.

Prediction
Bojan Bogdanovic suffered a contusion in his right calf and will be forced to miss the game. The Jazz rank first in the league in terms of offensive efficiency, and the Spurs play at the fifth fastest pace.