Louis 2 Stade will host a game between Monaco and Clermont on Sunday.

Monaco
They are in form, getting a four-match unbeaten run even if they play two-fronted attack on the League and French Cup in the meantime. What’s more, they are good at home game, with 80% unbeaten rate. Now they rank the seventh in the table of the League. 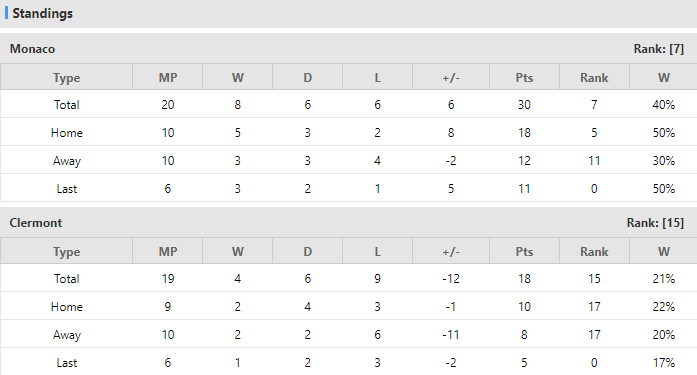 Clermont
Instead, they play poorly in the League this season. There is not enough quality for them to compete in the League. They are the fifteenth in the table of the League, with only two points away from relegation zone.

Verdict:
Monaco are certainly better than Clermont. In addition, Monaco got a winning streak from Clermonth in past head to head clashes, which makes them have psychological advantage. And Monaco have home advantage. So Monaco will possibly win in upcoming game.

Football France Ligue 1 Clermont Monaco
(Disclaimer：Any views or opinions presented are solely those of the author and do not necessarily represent those of NowGoal. We disclaim any responsibility and accepts no liability for any direct or indirect loss or damage arising from any inaccuracies.)