Denver hope to expand their winning streak to seven when they play Oklahoma City at home on Wednesday.

Denver Nuggets
The Nuggets rank second in the Northwest Division with a record of 36-25, 2.5 games behind the first Utah Jazz. Denver have won their sixth straight victory on Sunday when they beat the Portland Trail Blazers 124-92. JJaMychal Green added 20 points and grabbed 10 rebounds to help the Nuggets win with 32 points. 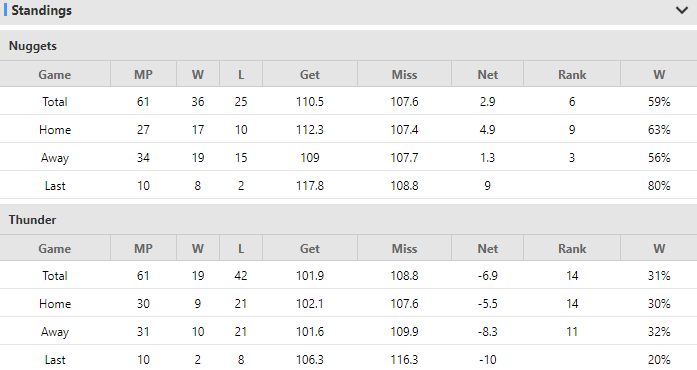 Oklahoma City Thunder
Oklahoma City are last in the Northwest Division with a record of 19-42, 19.58 games behind the first place Utah Jazz. On Monday, they were defeated 131-110 by the Sacramento Kings. Shai Gilgeous-Alexander  became Oklahoma City's leading scorer with 37 points. The Thunder were outscored by Sacramento 46-38.

Prediction
This is already a lot of points for the Denver Nuggets. They don't continue to beat the team or even win the game, but they are enjoying the best time of the season and have won by an average of 13.2 points in the past five games.