Brentford will be the visitors at Anfield on Sunday for the Premier League showdown with home team Liverpool.


Liverpool
Liverpool are currently third in the Premier League table with 42 points and are 11 points behind league leaders Manchester City. They were unbeaten in 44 of their last 47 overall games, and they had gone on an eight-fixture winning streak in the process.  Liverpool registered a England League Cup’s 0-0 draw with Arsenal at home the last match-day. That followed it up with a 4-1 win against Shrewsbury in England FA Cup. 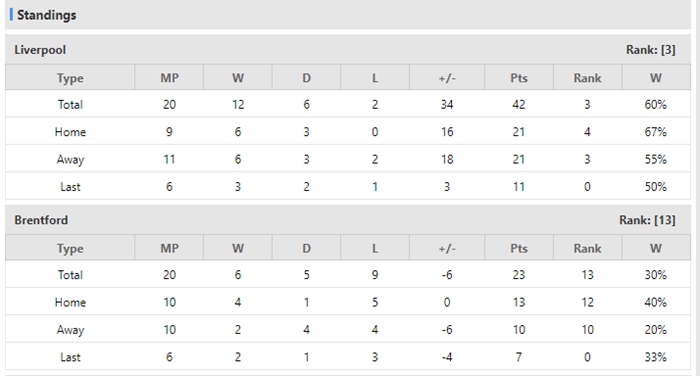 Brentford
It is now three defeats in their last four for Brentford in the Premier League, who are still comfortably 12 points clear of the relegation zone as they occupy 13th spot in the table. They were also winless in 11 of their past 16 overall matches, and they have a total of just two league wins on the road this season. Brentford suffered a heavy 4-1 defeat away at the hands of Southampton in midweek.


Prediction
Brentford did well against Liverpool in the first half of the season at home but they havent been that good in recent weeks. Besides, their away form has been rather poor. Given the fact that the match is going to be played at Anfield, Liverpool should be the winner here.

Football English Premier League Brentford Liverpool
(Disclaimer：Any views or opinions presented are solely those of the author and do not necessarily represent those of NowGoal. We disclaim any responsibility and accepts no liability for any direct or indirect loss or damage arising from any inaccuracies.)