Italian Serie A -- AS Roma vs Cagliari Game Preview

Roma will be facing visiting side Cagliari at Stadio Olimpico di Roma in the Serie A meeting on Sunday.


AS Roma
AS Roma are currently placed sixth in the Serie A standings - six points adrift of the Turin giants in the race for a Champions League place. With a seven-match winning run, AS Roma have been on a superb run almost through the entirety of 2021. Roma come into this game on the back of a 4-3 loss to ten-man Juventus in the league. During their past 6 games, AS Roma have scored 14 and conceded 11 goals. 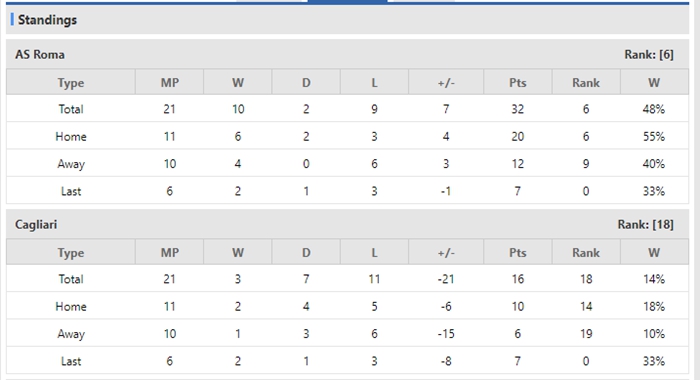 Cagliari
With 3 wins, 7 draws and 11 losses, Cagliari now rank 18th place on the table. They were winless in 18 of their preceding 22 games, and they have picked up three draws and only one win from their first 10 away games. Cagliari will go into the encounter after a 2-1 Serie A win as they beat Bologna in their last match. Only the dead-last placed Salernitana have conceded more goals than them in the competition.

Prediction
AS Roma have signed Ainsley Maitland-Niles and Sergio Oliveira this transfer window. It certainly seems that Cagliari could really find it hard to beat AS Roma side who should own this match.

Football Italian Serie A Cagliari AS Roma
(Disclaimer：Any views or opinions presented are solely those of the author and do not necessarily represent those of NowGoal. We disclaim any responsibility and accepts no liability for any direct or indirect loss or damage arising from any inaccuracies.)