Memphis hope to win their second consecutive game against San Antonio at home on Monday.

Memphis Grizzlies
Memphis are 42-20 ahead of the Southwest Division and six games ahead of the second-placed Dallas Mavericks. Memphis beat the Chicago Bulls 116-110 on Saturday, with Ja Morant scoring a career high 46 points. This victory ended the Grizzlies' two short losing streak. 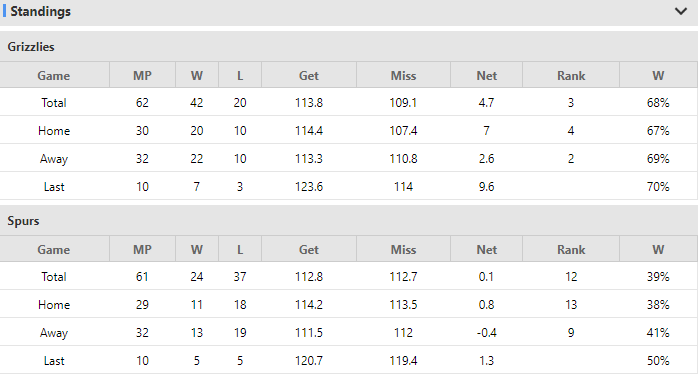 San Antonio Spurs
San Antonio make a record of 24-37, ranking fourth in the Southwest Division and 17.5 games behind the first-placed Grizzlies. The Spurs were defeated 133-129 by the Miami Heat on Saturday. Keita Bates Diop became the leading scorer of San Antonio with 22 points. However, the Spurs made 22 mistakes, while Miami made only 12.

Prediction
Over has cashed in five of the last six games in San Antonio and eight of the last 10 games in Memphis. Memphis scored 113.8 points per game, ranking second in the NBA with the overall 45.8% shooting percentage. San Antonio are also no inferior in the offense for averaging 112.8 points, ranking seventh in the league.