In ABC's second game, the Utah Jazz will play away against the Phoenix Suns.

Phoenix Suns
The Suns have won 26 of the first 32 home games, leading the Golden State Warriors for the best overall record in the league. Phoenix were outscored by 11 points in the third quarter of the 117-102 home loss to New Orleans on Friday. Devin Booker scored the team's highest 30 points and sent five assists in 10 of 24 shots on the court. 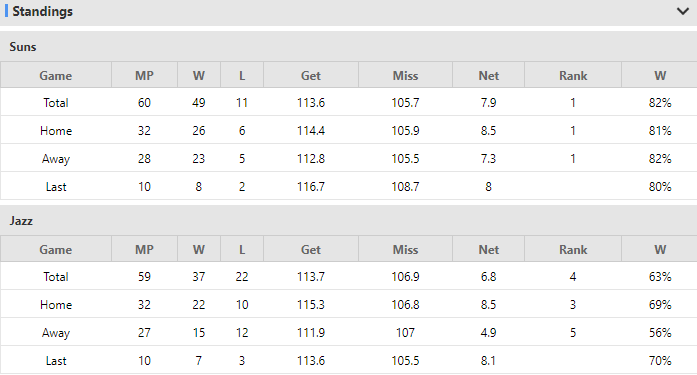 Utah Jazz
The Jazz (37-22) have won seven of the past ten games, three  games behind Memphis and rank third in the West. On Friday, Utah led Dallas by 12 points in the second half, winning 114-109 at home. Donovan Mitchell made 7 of 12 shots on the three-point line, scoring a game high 33 points. Rudy Gobert added 14 points and 17 rebounds to the Jazz.

Prediction
Chris Paul is expected to be absent until mid April due to a wrist injury. The Jazz have an advantage on the glass and will take advantage of Paul's injury. Lead Utah to a key road victory.