The Serie A game at Stadio Olimpico Grande Torino on Sunday sees home side Torino playing against opponents Cagliari.


Torino
While they have one game in hand, Torino are currently 10th in the Serie A table with 33 points from 25 games, level on points with 11th placed Sassuolo. They have now failed to win any of their last four outings, claiming two draws and losing two since a 2-1 win over Sampdoria on January 15. Torino put in a resilient performance as they came from behind to salvage a 1-1 draw in last Friday’s Turin Derby against Juventus. 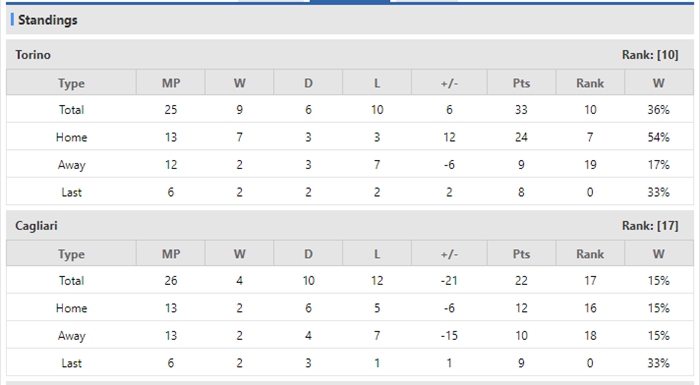 Cagliari
With 22 points from 26 games, Cagliari are currently 17th in the league standings, level on points with Venezia who are in the final relegation spot. They have now managed just one win from their last six games in all competitions, losing two and picking up three draws in that time. Cagliari were involved in a share of the spoils for the second game running last time out as they played out a 1-1 draw with Napoli.

Prediction
Looking at past results between the sides, a cagey and hard-fought contest at the Stadio Olimpico Grande Torino on Sunday is expected. But with home advantage, Torino have a chance to get back on the winning trail.

Football Italian Serie A Cagliari Torino
(Disclaimer：Any views or opinions presented are solely those of the author and do not necessarily represent those of NowGoal. We disclaim any responsibility and accepts no liability for any direct or indirect loss or damage arising from any inaccuracies.)