FC Barcelona
FC Barcelona are still 15 points behind leaders Real Madrid with a game in hand and sit fourth in the league standings. They are currently on a six-game unbeaten run in all competitions, last losing ironically to Bilbao themselves in a 3-2 defeat in Copa del Rey last month. Barcelona also overcame Napoli in a thrilling 4-2 victory in the Europa League on Thursday to qualify for the last-16 and boast a nine-game undefeated streak in La Liga. 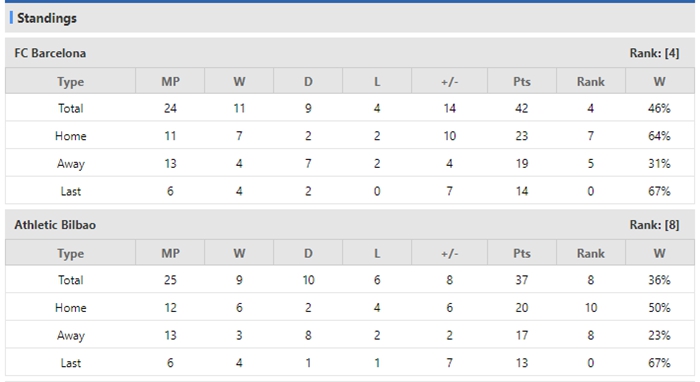 Athletic Bilbao
Athletic Bilbao sit in eighth position with 37 points as European football is on their agenda. They had also won five of their previous seven overall fixtures, and they had remained unbeaten in six of their past eight road trips. Athletic Bilbao have become a bogey side for Barcelona in recent times, having also held them to a 1-1 draw on the opening day of the league campaign back in August.


Prediction
With new arrivals making an immediate impact, Barcelona are playing with renewed vigor at the moment. Considering they have won 19 of their last 23 home matches against Athletic in all competitions, expect them to make it three straight victories

Football Spanish La Liga Athletic Bilbao FC Barcelona
(Disclaimer：Any views or opinions presented are solely those of the author and do not necessarily represent those of NowGoal. We disclaim any responsibility and accepts no liability for any direct or indirect loss or damage arising from any inaccuracies.)