West Ham United
Picking up 21 points from their 13 matches, West Ham United are currently fifth in the Premier League table. They are four points shy of Manchester United in fourth place and level on points with sixth-placed Arsenal. The 2-3 loss to Leeds and the 1-1 draw to Newcastle United in some of their recent home outings certainly represent below-par results for a team in contention for the top-four finish. 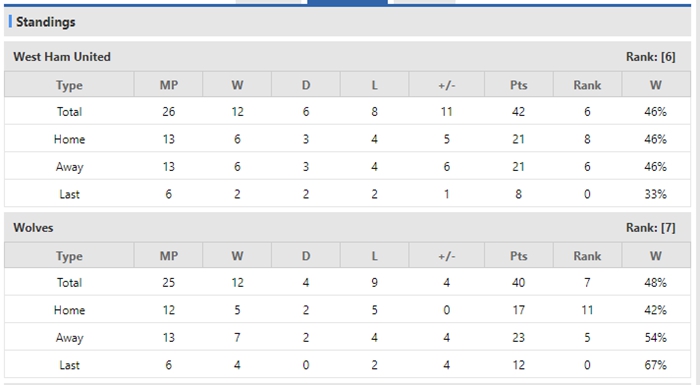 Wolves
Two points behind the host, Wolves are currently seventh in the Premier League table. Wolves have done particularly great on travels recently with a run of four consecutive victories on the road in the Premier League. They managed super-important back-to-back wins over Tottenham Hotspur and Leicester City recently. Only Manchester City have conceded fewer goals than them so far in the season.


Prediction
West Ham United behave surprisingly in this season while Wolves’ recent state is really impressive. It would not be a surprise to see a home or an away win on Sunday afternoon. So, both teams to score seems to be a good choice here.

BTTS (Both Teams to Score)

Football English Premier League Wolves West Ham United
(Disclaimer：Any views or opinions presented are solely those of the author and do not necessarily represent those of NowGoal. We disclaim any responsibility and accepts no liability for any direct or indirect loss or damage arising from any inaccuracies.)