Watford will be the visitors at Old Trafford on Saturday for the Premier League showdown with home team Manchester United. 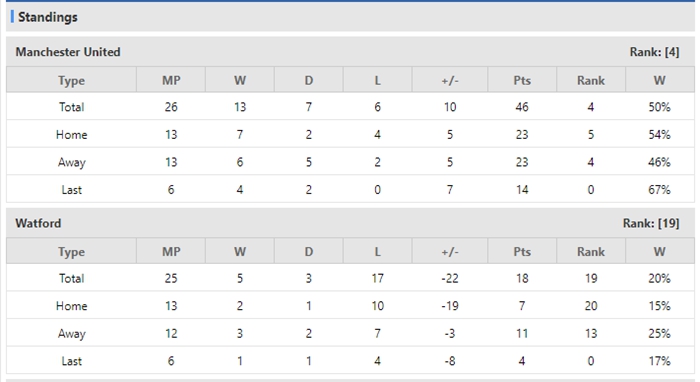 Watford
Watford sit 19th in the Premier League table with 18 points after 25 games. They were on a 12-game winless run before the 0-1 win against Aston Villa on the road the past game week. They have also won just thrice on the road since April of 2021. Watford were beaten 4-1 by Crystal Palace on Wednesday night. They have scored only 2 goals in their past 6 games.


Prediction
Manchester United have done pretty decently under Ralf Rangnick and have performed well at the back. They should have no trouble seeing off the lowly Watford .

Football English Premier League Watford Manchester United
(Disclaimer：Any views or opinions presented are solely those of the author and do not necessarily represent those of NowGoal. We disclaim any responsibility and accepts no liability for any direct or indirect loss or damage arising from any inaccuracies.)