Leeds United take on visiting side Tottenham Hotspur at Elland Road in this Premier League fixture on Saturday.


Leeds United
Leeds United and their leaky defence now occupy 15th spot in the rankings - just three points above the relegation zone. They have failed to win any of their previous five matches, and three of these were losses. Leeds lost 2-4 against Manchester United at home the last match-day. Apart from the 20th placed Norwich, they have conceded the most number of goals in the competition. 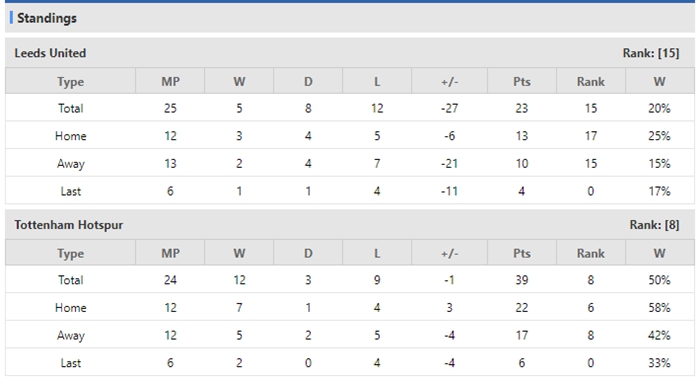 Tottenham Hotspur
Tottenham Hotspur are currently 8th in the league, seven points off the top 4. They have struggled recently, having lost three of their last five games across all competitions. But they have also lost just against Chelsea on the road since November. Tottenham just registered a 2-3 win on the road against English champions Manchester City. Tottenham Hotspur have scored 6 goals during their last 6 games, letting opponents get 11 goals in total.


Prediction
Despite both teams being in similar form, Tottenham should have enough quality to get past a poor Leeds side. Expect this will be a tight game, with Spurs coming away with all three points.

Football English Premier League Tottenham Hotspur Leeds United
(Disclaimer：Any views or opinions presented are solely those of the author and do not necessarily represent those of NowGoal. We disclaim any responsibility and accepts no liability for any direct or indirect loss or damage arising from any inaccuracies.)