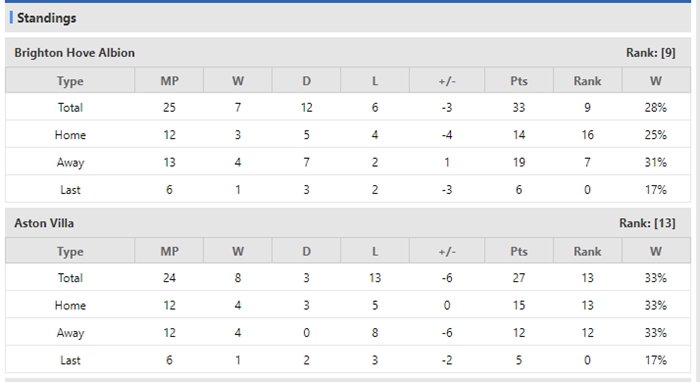 Aston Villa
With only one win from their last seven in the Premier League, Aston Villa head into the weekend down in 13th place - seven point gap to the drop zone. They were winless in seven of their past eight overall games. After settling for a 3-3 draw against Leeds, Aston Villa fell to back-to-back 1-0 defeats to both Newcastle United and Watford.


Prediction
Both Brighton and Aston Villa have enough quality to produce an exciting encounter. This should be a tightly contested affair, so take the over here.

Football English Premier League Aston Villa Brighton Hove Albion
(Disclaimer：Any views or opinions presented are solely those of the author and do not necessarily represent those of NowGoal. We disclaim any responsibility and accepts no liability for any direct or indirect loss or damage arising from any inaccuracies.)